Is Working Standing Up Bad For You?

It’s common knowledge that sitting for long periods of time at work can be detrimental to our health, with research showing it can lead to an increased risk of health problems such as diabetes, heart disease and obesity. But what about working while standing up?

With more and more businesses opting for standing desks for their employees, here are some of the findings on standing up while working.

Studies have shown that employees using standing desks were reported to feel less stressed and less fatigued than employees who stayed seated throughout the entire working day.

Not only this, but workers also reported an increase in energy while working when using standing desks. With such positive rises in mood and energy levels, standing desks could be the answer to keeping workers happy and enthusiastic about their work, as well as energetic and confident in taking on the tasks of each day. A common concern of standing desks is their functionality for employees while typing and working, with many companies assuming that sitting desks are better for productivity.

However, sources have shown that this is not the case. Results conclude that standing desks actually improve productivity, with a study stating that standing while typing had no impact or changes to the number of words per minute and showed no additional typing errors compared to sitting down.

Further reports have shown that worker’s productivity is increased by 10% when using a standing desk, which isn’t that surprising given the increase in mood and energy levels. 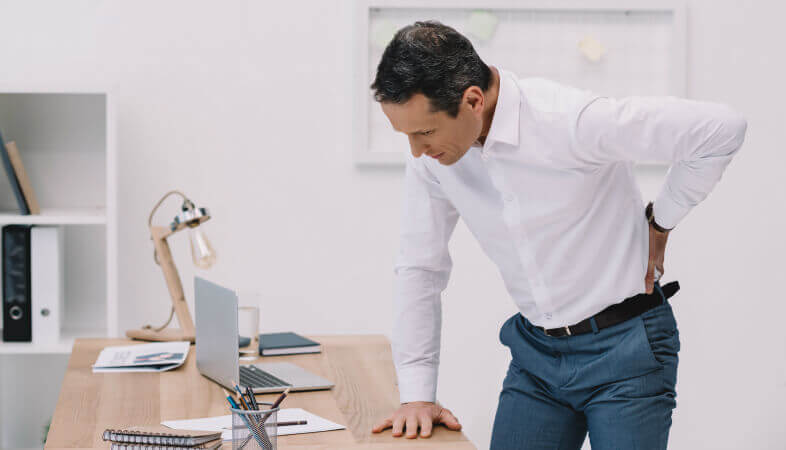 A major issue for many people who work long hours at a desk is the aches and pains associated with sitting for long periods of time.

Research has shown that workers reported a 32% improvement in lower back pain after several weeks of using a standing desk instead of a sitting one, which is an encouraging result considering that back pain is a common complaint for those working in office environments.

Though it’s not just these conditions that can affect workers, weight gain is a popular factor for employees who work at desks due to the lack of movement involved in sitting for such long periods of time. That being said, a study has discovered that 170 additional calories can be burnt in an afternoon of standing while working, when compared to the same length of time spent sitting.

Research has also shown that other health issues can be reduced by standing up instead of sitting, including conditions such as heart disease, high blood sugar levels, type 2 diabetes and obesity.

Overall, studies have shown that working while standing, when combined with appropriate safety measures, can lead to many benefits to workers health, mood and productivity.

Whichever way you choose to work, there are certain steps and precautions you can take to reduce the risk of injuries or illnesses from occurring – here are some of the factors to consider to help you stay safe while at your desk.

• Use a padded desk mat for your feet to relieve the pressure of sitting or standing all day
• Take regular breaks away from the screen to both maintain productivity and reduce eye strain
• Work in cycles of sitting and standing as opposed to sticking to one position all day
• Regularly move your muscles to avoid them from cramping or causing you pain
• Make sure your desk is both organised and adjusted to suit you personally, for instance consider the height of your computer screen to reduce neck aches and pain

Copyright HADO © | All Rights Reserved | All Trademarks Are Herein Acknowledged

You can find out more about which cookies we are using or switch them off in settings.

Cookie information is stored in your browser and performs functions such as recognising you when you return to our website and helping our team to understand which sections of the website you find most interesting and useful.

Strictly Necessary Cookie should be enabled at all times so that we can save your preferences for cookie settings.

If you disable this cookie, we will not be able to save your preferences. This means that every time you visit this website you will need to enable or disable cookies again.

This website uses Google Analytics to collect anonymous information such as the number of visitors to the site, and the most popular pages.

Please enable Strictly Necessary Cookies first so that we can save your preferences!